So, I finally finished making my Jewelery Frame. Yes, I invented this months ago, when I was on the hunt for something to hold my jewelery. I have never really like the jewelery box idea, so I've kept them in a bunch of separate dishes, and I would just plum forget what I had. So I wanted something that displayed it all. Don't get me wrong, most of my stuff is junk jewelery, but some of it is nice. I saw someone display it all on a wall with a bunch of nails. I liked that idea, but I didn't have that much room. Somehow, I thought of a frame, where I could put a bunch of hooks, nails and wire/chain to display it all. The effort paid off. I LOVE how it turned out! What do you think? Be honest with me, I can take it! My daughter loved it and wants one, so I will make her one too. I was going for whimsical. I think I still may end up putting on some sparkly stars and a few words here and there on the wood, but mostly, it's done! 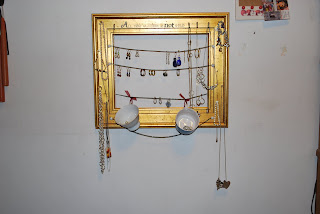 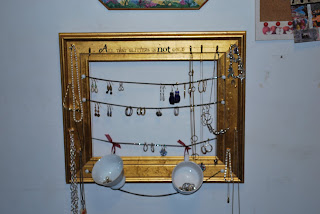 I also decided to take my daughter's senior pictures, to save @ $300 from school. They came out so well. I've picked out my two fave for you to see. 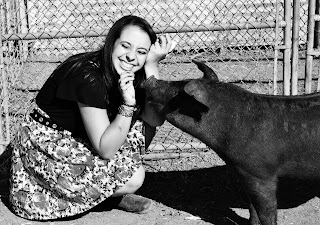 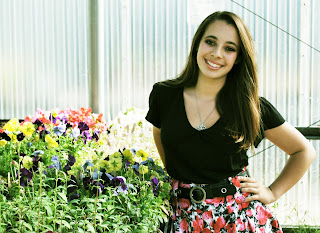 Posted by Nursapalooza at 11:48 AM

I like it! I think I would try, instead of putting the cups on there, to put smaller bags or dowels or something, I think the cups kind of drag it down. Neat idea though, very neat.

I really like the frame!! I hate jewelry boxes too and can't see to find something I like. What a neat idea and I think I might try making something like that!
I like the senior pictures too. It just blows my mind how much this stuff costs. My oldest didn't want a senior ring (thank goodness) my middle son wanted one and it broke the bank!

Hey Kim, yeah, I was something kind of old or whimsical. I'll try to think of some other ideas. It holds my post earrings. Do you ziplocs? I don't like that...but I'm thinking, what else? All ideas appreciated. I have pondered covering some styrofoam with fabric to stick them onto, but I'm not sure where/how to place that.

Go for it Lorie! It was fun, and relatively easy. I got the frame at a craft store with a 50% coupon, and used chain on a roll that they had in the ribbon section. I used carpenter tacs to keep those babies in place. And the nails were just decorative nails, cheap.

Thanks Tif, you are very kind.

wow, that looks amazing!! i want to learn!!

here's the blog of the girl whom i saw the hair tutorial for: http://chelsea-rebecca.blogspot.com/